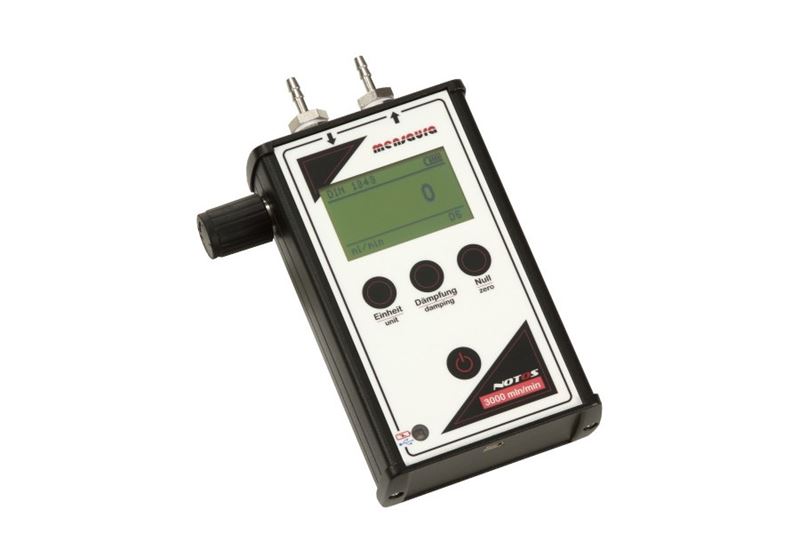 Mobile flowmeter with integrated lithium-ion battery and optional control valve. Suitable for use as a leak calibrator, test leak or for simple leak testing.

The NOTOS is a flow meter based on the calorimetric (thermal) principle, which was developed especially for mobile use.
It has a built-in lithium-ion rechargeable battery, which can run for up to 20 hours, as well as intelligent charging electronics with automatic charging shutdown. The NOTOS uses state-of-the-art microprocessor technology to linearize the waveform as well as the most precise sensors, thus achieving the extremely high accuracy that all mensaura flowmeters offer. It has a large, easy-to-read graphic display on which the measured value as well as unit, damping, battery status and gas standard are shown clearly.

In addition to the charging function for the integrated lithium-ion battery, the USB interface allows bidirectional communication for the configuration of the devices, as well as for digital, serial output of the measured value with free software under a wide range of operating systems. This is made possible by an integrated USB-serial converter. As a result, all relevant functions can be controlled via software, as well as via the well-designed control panel. The devices of the NOTOS series offer the possibility to switch the unit of the measured value via a button or via software. For this purpose, four additional units are available in addition to the basic unit “mln / min”.
The 9-stage damping serves to stabilize the measuring signal in the case of unsteady or pulsating flows. The devices are also tared via a button or via the software. The (optional) precision needle valve allows a precise adjustment of the desired flow rate and thus the operation as a test leak or leak calibrator. The pressure loss in the devices of the NOTOS series is negligibly low, and the dead volume of the devices has also been reduced to a minimum. The response times of the sensors are exceptionally fast. The devices are calibrated according to DIN1343 with air (0 ° C and 1013mbar), but a total of six different gas standards can be selected via software. The robust aluminum housing, the adjustable resolution and the optional precision needle valve round off the NOTOS to a portable, unique and well-equiped precision instrument.

Operating instructions, software and further downloads can be found here.